#PavementsR4Pedestrians – but often not in Bishopston, St Andrews and Ashley Down where traffic and parking is largely unregulated or, if it is regulated, the regulations are rarely enforced. The result is a daily, unsafe and unpleasant assault course for pedestrians and cyclists (1). Particularly for those with mobility and sensory impairments and for those who use buggies and wheelchairs to get around, the pavements in Bishopston, St Andrews and Ashley Down are often inaccessible, unsafe and unwelcoming (2).

At the weekend local residents took to the road to protest about the blocking of pavements by inconsiderate drivers and the lack of regulation and enforcement of local parking. 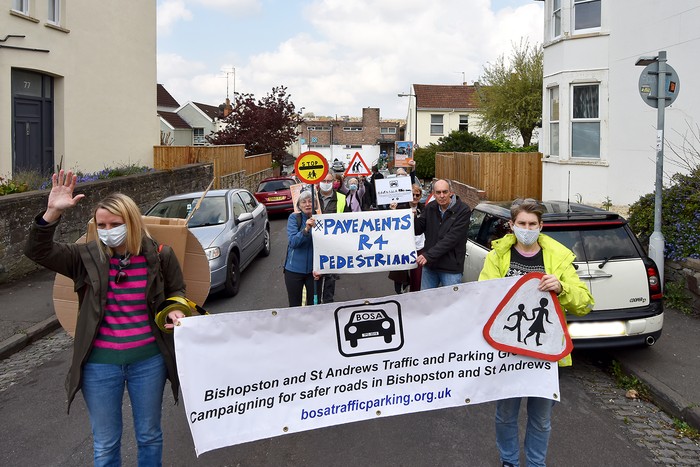 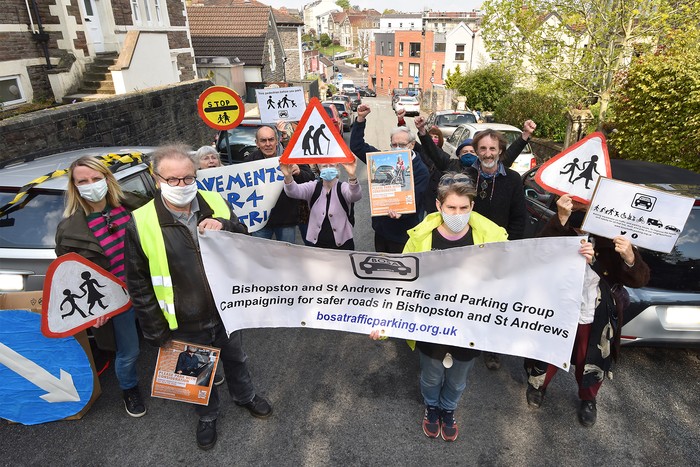 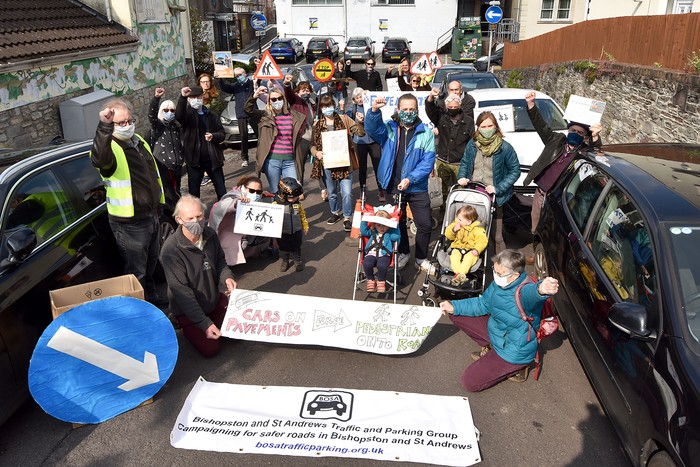 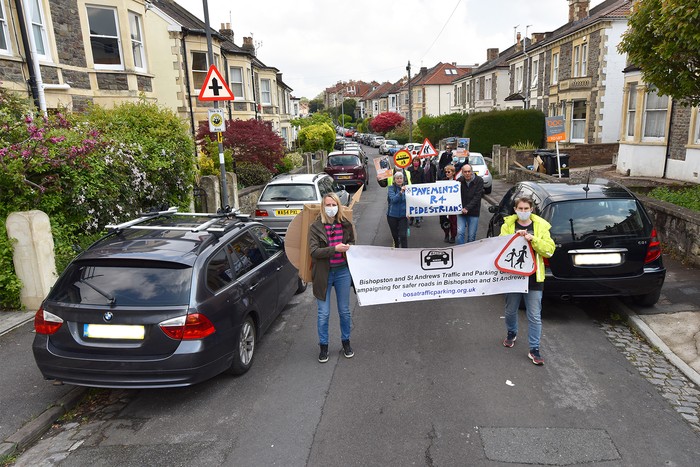 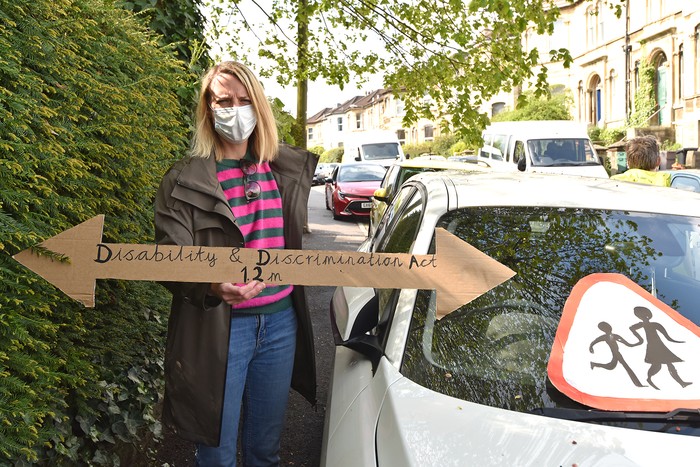 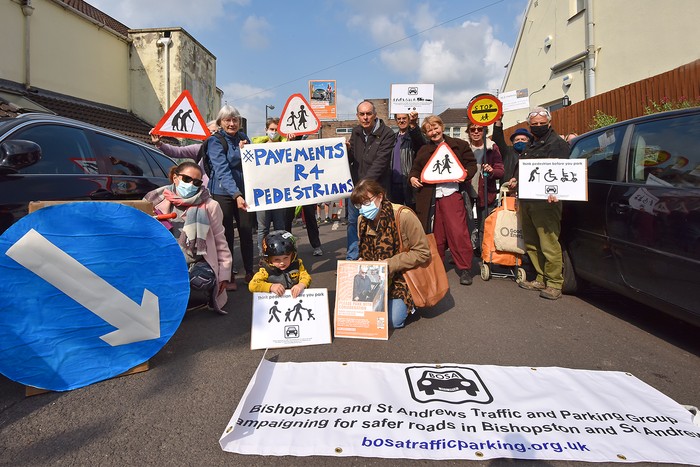 Cars on Pavements force Pedestrians into the Road:

When drivers store their vehicles on street corners, across dropped kerbs and on pavements, they oblige often vulnerable pedestrians to walk in the road – unlit after dark; or prevent them from leaving home for fear of the dangers of obstructive parking, denying them the right to access work, shops, leisure opportunities and a social life:

Going out independently is enough of a challenge as it is, the added stress caused by thoughtless drivers is something I really don’t need and makes a life with already limited choices even more difficult. (RNIB Volunteer Campaign Coordinator) (3)

If police or council enforcement officers are asked to sanction drivers’ behaviour, local residents are told that the double yellow lines are too faded to enforce; it is possible to squeeze past vehicles stored on the pavement; staff resources are too low to enforce the regulations; and it is suggested to lobby the council to provide more double yellow lines, dropped kerbs and enforcement. But residents have been in dialogue with Mayor Marvin Rees and the Labour administration at City Hall for five years and their pleas have met with inaction locally (4) – despite a recent survey undertaken by council officers in which residents favoured action to regulate traffic and parking in the area (5).

Use your Vote this Week to Voice your Views on the Unfair Use of the Street Space in Your Area:

Bristol City Council and Avon & Somerset Police between them already have the powers to regulate traffic and parking on residential streets, and more powers are predicted (6). So will the next Mayor and local councillors use these powers? Bishopston and St Andrew’s Traffic and Parking Group (BOSA) (7) has been campaigning to find out. The plight of buggy and wheelchair users, the lack of double yellow lines on corners and across dropped kerbs and the failure to enforce the regulations that are in place have all been demonstrated in graphic photo shoots published across the West of England and beyond.
We have asked every Mayoral and council candidate in our local area if they will commit to urgent action to restore the pavements to pedestrians and an area-wide programme of traffic and parking regulation. See candidates’ views at Local Candidates Urged to Support Campaign for Safer Parking and Traffic – Bishopston and St Andrews Traffic and Parking Group (bosatrafficparking.org.uk) This week’s elections for Mayor and Councillors give residents the opportunity to log how fed up they are with living in a largely unregulated vehicle storage zone, wedged between three Residents’ Parking Zones and soon the new Clean Air Zone as well.

And after the election?

BOSA will not give up. After the election we plan to increase reporting to the police and council enforcement team, seek systematic plans for local enforcement and work with the new Mayor and Cabinet members to enable the fair allocation of street space to pedestrians, wheelchair and buggy users. Do join us.

(3) Parking on the pavement, even with just two wheels, can be dangerous. It obstructs safe sight lines for crossing the road and may force vulnerable pedestrians to negotiate kerbs where there are no drop kerbs and to walk in the road. It may also threaten people’s independence and wellbeing if they are put off going out and about on their own because they don’t know whether they can get to the shops or the bus stop safely.

(4) No systematic pavement parking and traffic regulations measures have been instituted in the past five years in the Bishopston and St Andrews area despite repeated requests, a council survey of residents (see Endnote 5 below) and ongoing communications with the Mayor, the Cabinet Lead for Transport and meetings with local councillors. Just in the past month as the Mayoral election loomed, the Mayor replied to say that he, Kye Dudd, the Cabinet lead for transport and council transport officers were willing to meet with us. In the end we met just with Kye Dudd to seek his commitment to making Bristol’s pavements accessible and safe, providing unobstructed, pedestrian access along them for everyone including disabled people, children, the elderly, and those pushing and using wheelchairs and buggies. We heard from Kye at this meeting that by the end of this year there will be a city-wide policy for LTNs and their implementation possibly within the next three years. Also he told us that the traffic officer team has been asked to look at junction protection issues and a possible extension to the Redland RPZ. No dates for commencement of this work are available yet.

(6) Already in Scotland, London, Exeter, Worcester and Hereford parking on the pavement is illegal unless otherwise stated by street signs. In Bristol current highways legislation is ambiguous and costly to enforce, falling between local authority and police enforcement powers. The result in Bristol is that many drivers obstruct pavements and dropped kerbs on a daily basis, even where double yellow lines prohibit any parking. Often they are unaware of the danger to pedestrians that their parking habits cause.
The Highways Act 1980 (Section 130 (1)) imposes a duty on highways authorities to assert and protect the rights of the public to use and enjoy the highway. Regulation 103 of the Road Vehicles (Construction and Use) Regulations 1986 states that: “No person in charge of a motor vehicle …shall cause or permit the vehicle to stand on a road so as to cause unnecessary obstruction of the road.” This includes vehicles parked on footpaths. Contravention of this regulation is a criminal offence and the police can require removal of the vehicle. In summary, drivers are committing an offence when they park on the pavement where there are double yellow lines on the road, or where they obstruct pedestrians.
The Royal National Institute for the Blind’s position is that a failure to enforce these regulations is a breach of the Equality Act 2010 because it places blind and partially sighted people at a substantive disadvantage (‘Parking on Pavements – Quick Wins for Local Authorities’, How local authorities can work with blind and partially sighted people to build a better future, Based on RNIB’s Quick wins and missed opportunities report, June 2012).
BOSA would add that children, the frail elderly, people with mobility impairments are also disadvantaged. Rule 244 of the Highway Code states: “You MUST NOT park partially or wholly on the pavement in London, and should not do so elsewhere unless signs permit it. Parking on the pavement can obstruct and seriously inconvenience pedestrians, people in wheelchairs or with visual impairments and people with prams or pushchairs.” Moreover, pavements are not built to take the weight of vehicles so the local authority may accrue unnecessary, additional, maintenance costs. Local authorities may face personal injury claims if pedestrians trip on broken pathways, or they may have a case to claim for damage caused to the footpath and kerbs.
The Transport Select Committee’s 2019 report on Pavement Parking Recommendation 5 asked the Government to speed up the transfer of parking powers from the police to local authorities for those areas that have yet to decriminalise parking. Government responded that it would move forward in haste with this recommendation (https://www.livingstreets.org.uk/news-and-blog/blog/pavement-parking-the-break-down). For an up-to-date explanation of parking enforcement legislation see Pavement parking: options for change – GOV.UK (www.gov.uk)