#PavementsR4Pedestrians – but often not in Bishopston, St Andrews and Ashley Down where traffic and parking is largely unregulated or, if it is regulated, the regulations are rarely enforced.

The result is a daily, unsafe and unpleasant assault course for pedestrians and cyclists – a situation that the Bishopston and St Andrew’s Traffic and Parking Group (BOSA) want to change.

Despite a high profile campaign launched by BOSA, featuring on Channel Five’s “Britain’s Parking Hell”, no systematic pavement parking and traffic regulations measures have been put in place in the past five years in the Bishopston and St Andrews area – despite repeated requests, a council survey of residents and ongoing communications to the Mayor, the Cabinet Lead for Transport and meetings with local councillors. BOSA says that residents’ pleas to the current Mayor Marvin Rees have met with inaction locally and want to know what the next Bristol Mayor will do about it? In the run up to the Mayoral and council elections in May, BOSA is campaigning to find out.

A spokesperson for Bishopston and St. Andrews Traffic and Parking group says: “After some months of requests for a meeting with the Mayor, a meeting with Councillor Dudd, the Cabinet lead for transport took place by zoom on April 13th. Although Councillor Dudd was sympathetic to BOSA’s concerns and was positive about the concept of ‘low traffic neighbourhoods’ as a way forward, he was unable to offer any concrete proposals to improve the unacceptable situation in the near future. We will be continuing to seek a commitment to making Bristol’s pavements accessible and safe, providing unobstructed, pedestrian access along them for everyone including disabled people, children, the elderly, and those pushing and using wheelchairs and buggies.”

Local residents have taken to the streets to highlight the parking mayhem on roads in St Andrews. They photographed the vehicles of inconsiderate drivers who store their vehicles on pavements, across corners, parking near junctions, on yellow lines and dropped kerbs. 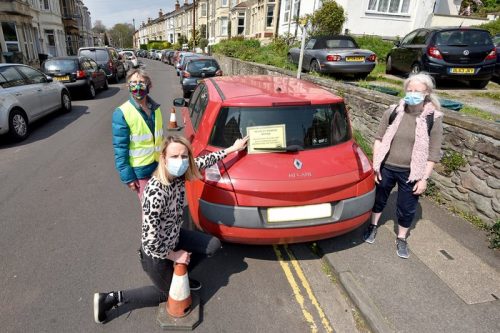 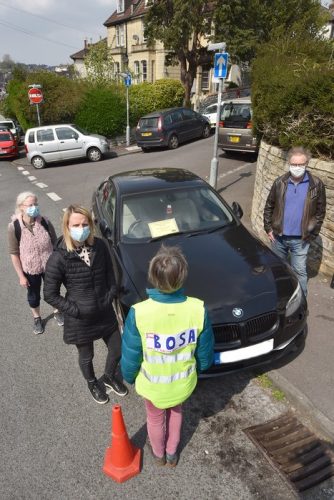 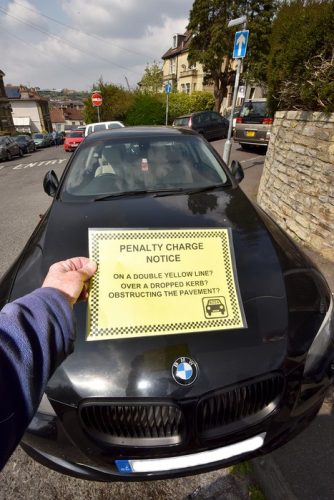 Inconsiderate parking causes a real issue for those with mobility and sensory impairments and for those who use buggies and wheelchairs to get around. The pavements in Bishopston, St Andrews and Ashley Down are often inaccessible, unsafe and unwelcoming.

When drivers store their vehicles on street corners, across dropped kerbs and on pavements, they oblige often vulnerable pedestrians to walk in the road – unlit after dark; or prevent them from leaving home for fear of the dangers of obstructive parking, denying them the right to access work, shops, leisure opportunities and a social life. A RNIB Volunteer Campaign Coordinator says: “Going out independently is enough of a challenge as it is, the added stress caused by thoughtless drivers is something I really don’t need and makes a life with already limited choices even more difficult.”

Speaking on behalf of BOSA, a spokesperson says: “If police or council enforcement officers are asked to sanction drivers’ behaviour, local residents are told that the double yellow lines are too faded to enforce; it is possible to squeeze past vehicles stored on the pavement; staff resources are too low to enforce the regulations; and it is suggested to lobby the council to provide more double yellow lines, dropped kerbs and enforcement. But residents have been in dialogue with councillors and Mayor Marvin Rees for five years – to no avail, despite a recent survey undertaken by council officers favouring action to regulate traffic and parking in the area.”

The May elections for Mayor and Councillors give residents the opportunity to log how fed up they are with living in a largely unregulated vehicle storage zone, wedged between three Residents’ Parking Zones and soon the new Clean Air Zone as well.

Bristol City Council and Avon and Somerset Police between them already have the powers to regulate traffic and parking on residential streets. Already in Scotland, London, Exeter, Worcester and Hereford parking on the pavement is illegal unless otherwise stated by street signs. In Bristol current highways legislation is ambiguous and costly to enforce, falling between local authority and police enforcement powers. The result in Bristol is that many drivers obstruct pavements and dropped kerbs on a daily basis, even where double yellow lines prohibit any parking. Often they are unaware of the danger to pedestrians that their parking habits cause.

But will the next Mayor and councillors use these powers? The Bishopston and St Andrews Parking Group want to know the answer: “We have asked every Mayoral and council candidate in our local area if they will commit to urgent action to restore the pavements to pedestrians.”